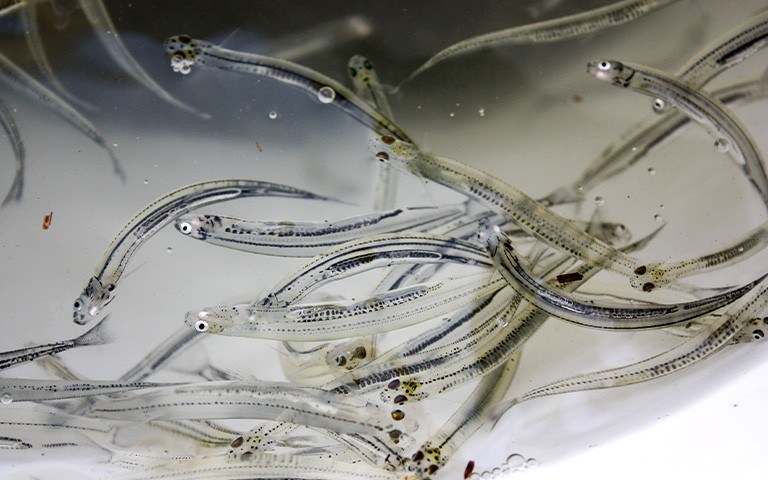 The purpose of the research, funded by Department of Conservation’s (DOC) Community Fund / Pūtea Tautiaki Hapori, and undertaken by EOS Ecology and the University of Canterbury’s Marine Ecology Research Group in partnership with Te Hapū o Ngāti Wheke, was to understand where īnaka spawn in the area and improve their spawning habitat to help sustain future populations of whitebait.

The mahinga kai search was led by the WOHH Head of the Harbour project, which encompasses more than 3000 hectares of rural land, stretching from Allandale through the Foleys, Teddington and Waiake Stream catchments, around to the Head of the Bay.

EOS Ecology’s Shelley McMurtrie described the first step in the investigation process as identifying the saltwater wedges – the area where saltwater from the sea meets freshwater from the river.

Īnaka are most likely to spawn in these areas, as it provides the perfect position for adults to reach from upstream and larvae to launch themselves out to sea.

Habitat surveys were then carried out nearby the saltwater wedge, to see what vegetation was on offer, the angle of the riverbank, and the ground conditions for eggs to develop.

“We looked at four sites across the catchment and found some patches of good spawning habitat, but there are larger areas that could benefit from habitat improvements to improve īnaka spawning success,” Shelley said.

Marine Ecology Research Group’s research associate Mike Hickford then completed a physical search of the four sites to look for īnaka eggs, and marked each site with flags indicating their exact locations.

His group also checked the density of vegetation on the riverbanks, before making an approximate count of the eggs at random sections of each site to get an estimate of spawning locations at each of the four sites.

“We found eggs at two of the four sites, with spawning occurring in both good and bad habitat. If īnaka chose what we would call poor spawning habitat, the likelihood of eggs surviving is low,” Mike said.

Head of the Harbour project coordinator Kathryn Bates then spoke about next steps for the programme.

“We’ll be looking to develop some design options for restoration works, in consultation with landowners. Further down the track we’ll also have to think about things like further funding sources, resource consents, and then getting an estimation for the cost of the work to be done to improve the īnaka habitats,” Kathryn said.

DOC’s funding has covered the one-year pilot study, but the group is hoping to gain a further year’s funding to implement the study’s recommendations across the catchment.

This project is led by Te Hapū o Ngāti Wheke and the Head of the Harbour project, and is supported by Department of Conservation, University of Canterbury, EOS Ecology, Whaka Ora Healthy Harbour and its partner organisations.

Why is this project important?

Where was the project carried out?