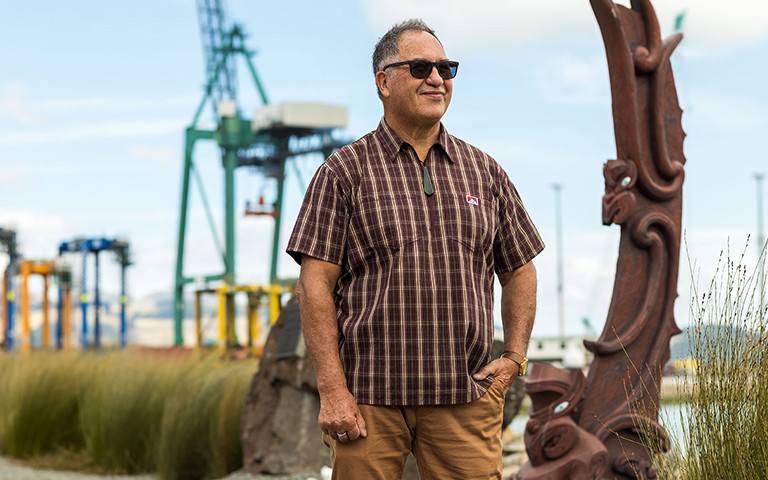 This new role is designed to upskill the company in Tikanga Māori, build relationships with local iwi and develop cultural resources for LPC.

“In my role, I think I’m in a unique position to pass on knowledge and unify the team,” Tahu says.

He’s developed a waiata and is creating a haka which will help to build a unique LPC company culture.

“The waiata is ours – it talks about supporting everyone, helping them to prosper and become more sustainable while bringing back the penguins and dolphins,” Tahu says.

“I think that cultural training gives the staff here another feather in their cap. I feel lucky to work with such a diverse group of people and I think that when you learn about another culture it’s also about discovering oneself and the intrinsic principles in your own culture that show how we are not so different after all.

This is a diverse place and the culture is the glue that holds it together.”

History at the Port

Tahu has a long history with LPC. His father and uncle worked at the port 50 years ago and his brother has been with the company for 30 years.

“My father would be proud of this work I’m doing what he helped to start.”

Tahu’s first job was with the port.

“When I was 15 and on school break, I was a seagull, or a non-registered labourer.

The work back then was very labour intensive, unloading from rail wagons to the ship, going into the hull of the ship to pack the produce and vice versa, it was hard, satisfying work.”

Since then, Tahu has worked in health and education and community organisations.

He was a Māori health promoter and helped to campaign for smokefree legislation.

He was also part of the team that founded TahuFM 30 years ago, to give Māori language a public broadcasting platform.

One part of that role is to build the relationship between LPC and Ngāi Tahu around their shared goals of a healthy harbour.

Tahu says the port is a special place to work. He appreciates the history of Lyttelton and is keen to use his role to celebrate the uniqueness and diversity of the company.

LPC is one of the five partner organisations of Whaka-Ora Healthy Harbour, working to restore Whakaraupō to mahinga kai for future generations.