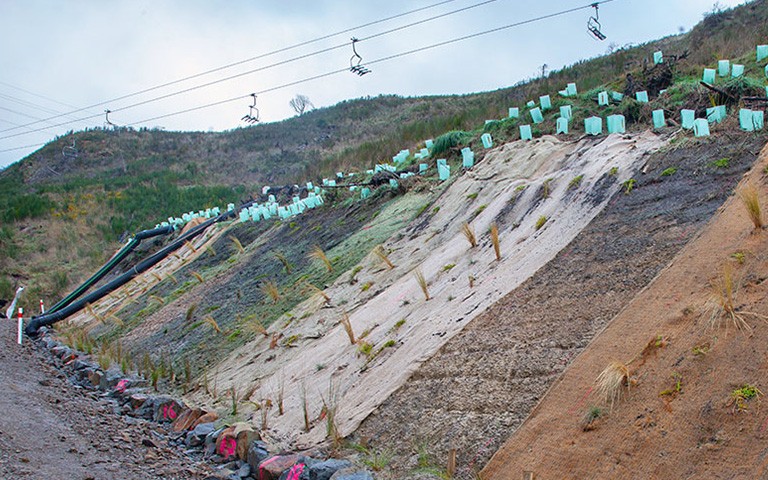 Nine months into a trial to tackle roadside erosion in Banks Peninsula, progress has been made.

An update on the Whakaraupō/Lyttelton roadside cuttings trial was presented by EOS Ecology to around 20 people last week.

EOS Ecology principal scientist Shelley McMurtrie led a group of community and Banks Peninsula Water Zone Committee (BPZC) members to a track in the Canterbury Adventure Park where testing has been carried out to reduce erosion and sediment discharge.

The test site is part of the wider long-term Whakaraupō Roadside Cutting Trial programme, which aims to develop cost-effective approaches to cut slope erosion control that could be implemented around the harbours’ many roads.

The programme is aiming to find the best combination of erosion control products and vegetation while providing full coverage of cut faces over the long-term to improve slope stability and reduce surface erosion.

As part of the Whaka-Ora Healthy Harbour Plan, the trial was adopted by the BPZC to help protect water quality in the zone. It is supported by Christchurch City Council and Environment Canterbury and contracted out to EOS Ecology and Manaaki Whenua/Landcare Research.

Different plants and products put to the test

The site consists of a re-battered cut face that includes rock toe support and above slope planting. On the face of the slope, a variety of products and plants have been applied. A number of rolled and sprayed on erosion control products have been applied to the face and then planted with six different native plants.

Detailed monitoring of the plots by the science team is undertaken every three months.

Shelley McMurtrie said the pilot site has provided a number of insights, despite it only being operational for a short period of time.

“Loess (clay-sized soil typical of the Banks Peninsula and Port Hills) is notoriously hard to grow anything in, so it’s been great to see how most of the native plants we are trialling are growing,” she said.

“Instead of expensive options we looked at realistic options which could potentially be replicated in other plots of land around Banks Peninsula. This trial is about real life scenarios and inexpensive options.

“The area has been divided up into segments where we’ve trialled different treatment applications – such as rolled products and spray-on products, and then planting directly into the face,” Shelley said.

Progress, but some pest setbacks

Although the project is progressing well so far, there has been the odd setback too.

“We have planted a mix of native ferns, grasses/sedges, and the native ice plant,” Shelley said.

“Unfortunately, what we’ve found is that ice plants are a possum’s favourite food it seems. Over the space of a few months, the large juicy ice plants were eaten to death. Our wildlife cameras showed the possums returning night after night to feed on them – even when the plants were barely still alive.

“On some of the plots you can see the tracks dug into the hillside where the possums are coming back night after night to check on the plants. With possum numbers so high in the park we will not be using this plant again. However, in areas with fewer possums, the native ice plant could be a potential species to use.”

EOS Ecology will continue monitoring the site and its progress every three months for at least the next two years. The Banks Peninsula Zone Committee hopes funding will be confirmed by Councils to continue roadside cutting trials on other sites around Christchurch and Banks Peninsula.