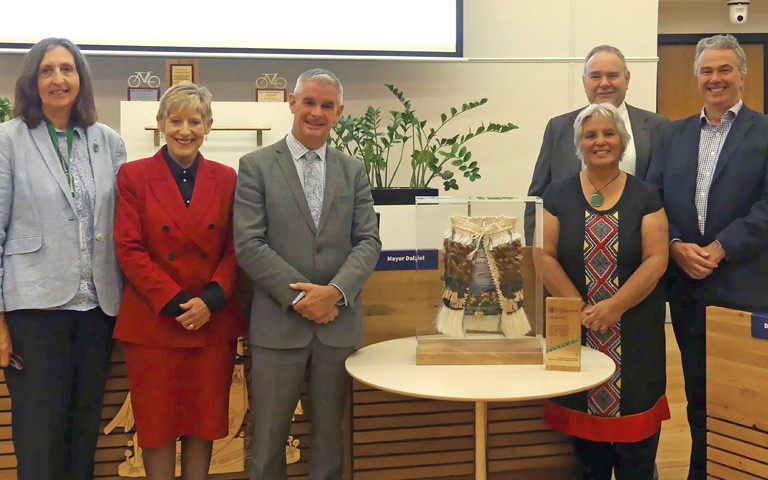 The Whaka-Ora Healthy Harbour plan and korowai was handed to the Christchurch City Council by the Lyttelton Port Company at a ceremony in the council chambers this morning, signifying the importance of working together to restore mahinga kai to Whakaraupō / Lyttelton Harbour.

A korowai made of feathers representing the kaitiaki / guardian for each band in the plan cloaks the document, signifying its importance and the commitment made by the partners and community to fulfil the Whaka-Ora vision.

LPC’s outgoing Chief Executive Peter Davie said the plan is the result of a commitment made by the partners under the Lyttelton Port Recovery Plan 2015.

Cr Turner said the plan is an important shared vision and partnership for all residents of Whakaraupō / Lyttelton Harbour.

“The korowai keeps the plan warm and safe. It is symbolic of our position as custodians of Whakaraupō and it shows the importance we attach through this plan to the environmental, ecological and cultural values that are so well expressed through Whaka-Ora.”

Cr Turner also praised Peter’s passion for the plan, as he is set to retire at the end of this month after 16 years as Chief Executive of LPC.

“I’d also like to acknowledge the commitment that Peter has given to the health of the harbour.”

Chair of the Whaka-Ora Healthy Harbour governance group Yvette Couch-Lewis spoke at the ceremony, challenging all partners to ensure the plan remains a living document.

“This is an aspirational living document – we all need to work together to support it so that one day, we can take the korowai off that plan, when we know mahinga kai and the health of the harbour is restored.”

Representatives from all five partner organisations attended the ceremony, which included the inaugural performance of LPC’s company waiata.

In closing, the Mayor praised the partner organisations, saying it was a plan that could be replicated by partners in other areas of Ōtautahi / Christchurch.

“The Whaka-Ora Healthy Harbour plan is the essence of a collaborative process – it is inspiring the things that truly matter, and we also believe the plan could be transferable to other precious waterways in Christchurch.”